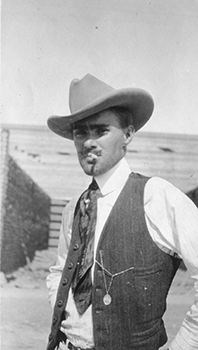 We read in our archives about the impact Abe Cosby had on early Gilbert.  Professionally he was as a real estate and development man.  We have pictures of his office on Main Street (Gilbert Road) with a large real estate sign in front of it.  The office was south of where Liberty Market is today.  The ladies must have been very impressed with Mr. Cosby back in the 1920s, as he was a very dapper dresser and a flashy gentleman of the town.  I speculate some as I see women of today drooling over pictures of handsome Abe.

In addition to his real estate businessm Mr. Cosby became the judge for the Town of Gilbert.  There weren’t many crimes in Gilbert in his day, but Saturday evening created a lot of drinking, fighting and general small town mayhem.  It was the duty of Judge Cosby to have the offenders locked up when necessary.  Gilbert didn’t have a jail in the 1920s until the water tower was built.  Below the water tower, they built a pump house to protect the pumping equipment, and that adobe building became the answer for incarcerating law breakers.  A Saturday night drunk would be walked or dragged over to the pump house and pushed inside.  The Constable would shut the door and lock the huge lock securing the door.  Thus, Gilbert had its first jail.  The Town of Gilbert has preserved the water tower and the old pump house in “Water Tower Park” just west of Liberty Market across the street from the Hale Theater.

One of the interesting stories we have about this old jail is, one night the officer picked up a very drunk man at the Gilbert Pool Hall for fighting and being totally obnoxious.  Somehow he maneuvered the drunk north along Main Street to Page Street and then west to the alley and tossed the fellow in the “hoosegow” for safe-keeping.  The fellow still had some “vim and vinegar” left in him, and as he began to see better in the dark pump house, he noticed part of the tin roof was a bit loose.  The nails had sprung up, and the tin left a bit of space between the top of the wall and the tin roof.  The prisoner put a box he found under the loosened roofing and pushed his head against the metal.  To his surprise he was able to make room for his head and body to climb up and over the wall.  He fell out and immediately headed back to the bar.

The officer was still patrolling Main Street when he saw the man staggering toward another encounter at the pool hall.  A scuffle ensued and down went the drunk.  In those days the constable, who also acted as the night watchman for the businessmen, carried a night stick or billy club.  We don’t know if it was used, but the story goes that this time when “Jonathan Drunk” was put in the acting jail, he did not come out again.  The following day it was discovered how the man had escaped, and the tin roofing was nailed down to secure the jail.

Oscar Phelps served as Gilbert’s first marshal and was paid $20 a month.  His added duty was to check the locks on the business doors as well as keep peace and order in the community.

During this period, Gilbert also had moonshiners in the area.  A number of farmers attempted adding to their meager incomes by making liquor in stills they built for brewing their white lightning.  These lawbreakers were caught by the Maricopa County Sheriff’s men and local law enforcement, and those law breakers were brought before Judge Cosby to be sentenced.  The moonshiners were not paying the federal tax on their whiskey, and that was breaking the law.  It is hard to imagine a day when Gilbert was the home to moonshiners, but that day happened, and our early town records hold the stories to prove it.

As you eat in one of Gilbert’s Main Street restaurants, you can sit back and think of the day when Judge Abe Cosby was keeping the peace right here in quiet, easy-going Gilbert, back in the 1920s.  Wow!  That’s almost a century ago.  What changes will there be, by 2025?