Citrus One of the 5 C’s of Arizona 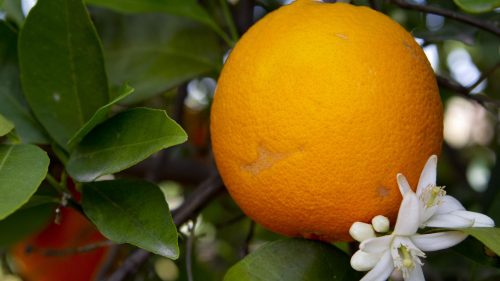 Citrus One of the 5 C’s of Arizona

Every Arizona grade school student learns about Arizona’s 5 C’s: Copper, Cotton, Climate, Cattle and Citrus. Students learn that all the C’s were crucial to Arizona’s economy. Many of the jobs in Arizona were influenced directly, i.e., copper miner, farmer, but many more occupations supported the 5 C’s such as stores clerks, teachers, truck drivers.

Some historians believe that Father Eusebio Kino, a Roman Catholic missionary, brought oranges into what we call today Arizona in the early 1700s.

Arizona’s citrus industry began in 1889 when farmer and developer William J. Murphy planted citrus trees, mostly oranges at Ingleside, today’s Scottsdale, at around 60th street and Indian School Road. Citrus was also planted in Mesa and Yuma as well as a few other places.  By 1935 there were about 21,000 acres of citrus growing in Arizona.

Why was Arizona selected for citrus farming?  It was chosen for the climate, cheap land and availability of water. The Salt River Valley (where Phoenix and Gilbert as well as other communities are located) in the late 1800’s and early 1900s was sparsely populated, had lots of cheap land, much of which had been originally farmed and irrigated by the Hohokam people (about AD1 – AD1450).  And the Salt River was perennial in those days, and water rights were easy to acquire. For some reason the American Indian population was low in the Salt River Valley, so early historic farmers claimed land through the Homestead Act or bought land from early land speculators.

One historic farmer, Jack Swilling, started his farm on land previously farmed by the Hohokam. It is said that he prepared the land and had his first harvest within the first year, 1867. His farm was near the east end of Sky Harbor Airport north of the Salt River.

In the early 1980s, I helped excavate a portion of his canal prior to airport expansion. During this excavation it was determined that Jack Swilling used the remnants of a Hohokam canal for his irrigation system. No wonder he could plant and harvest so fast!

It is reported that many other early historic farmers used Hohokam canals as the basis of their canals and ditches. In Mesa, near Lehigh, there are still examples of Hohokam canals on the surface, and many farms are growing citrus trees which were established on original Hohokam agricultural fields. When citrus fruit is ripe, you can find roadside stands that sell locally grown citrus.

Another reason the Salt River Valley and the Yuma area are good for citrus growing is climate. Citrus thrives in hot climates where there is plenty of water and where cold temperatures rarely drop below freezing for long.  It must be noted that freezing temperatures in the Salt River Valley do occur on occasion, and farmers used various techniques to save their crop using emergency irrigation, large fans and smudge pots that produce smoke. There is a smudge pot on display in the Farming Room at HD SOUTH. These techniques help save fruit, but there were a few freezes that destroyed the fruit. Extremely cold temperatures can kill citrus trees.

Sometime ago, I was traveling along the Gila River between Gila Bend and Yuma and saw hundreds of acres of grapefruit trees. My companion, a biologist and historian, told me that farmers looking to establish citrus farms believed that where Desert Ironwood trees grow in the Sonoran Desert, citrus trees will grow.  Desert Ironwood trees are also susceptible to freezing temperatures.

By the way, these are the same reasons why cotton farms thrived in much of southern Arizona. High temperatures, cheap land and water are what these crops need to be profitable.

Today, Arizona does not produce as much citrus as it did in its heyday the 1950s – 1970s. Arizona grown oranges, grapefruit, tangerines, and lemons can be purchased in local grocery stores. There are a few fruits stands left in the state where you can purchase fruit from the farmer. Local farmers’ markets offer fresh citrus as well as many other locally grown crops.

Ironically citrus farming is not what it used to be in Arizona because of relatively cheap land, water and the state’s climate. It is more profitable to sell land for development, build homes and businesses than it is to farm. Lots of people want to live here because the winters are mild. In addition, businesses are moving here for the same reasons and Arizona has a ready workforce.

Gilbert is not really known for citrus farming. Long time Gilbert resident and HDSOUTH volunteer Marji Scotten told me that the citrus farmers favored Queen Creek for growing citrus. Today there are still a number of citrus groves in Queen Creek.

Citrus trees are easy to grow and there are several varieties that thrive in the Salt River Valley.

For more information go to the Maricopa Country Extension Service website https://extension.arizona.edu/maricopamg.  Here you will find all the information you need.