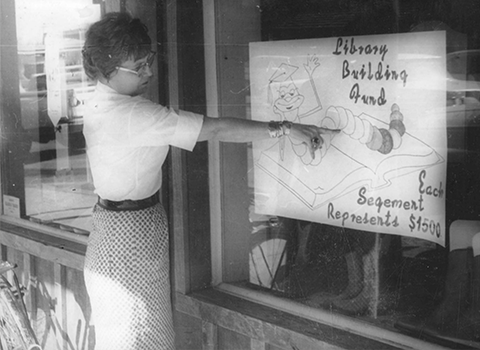 Many of you have heard of the Geneva Clay award that is given out by the Chamber of Commerce every year as part of their Community Excellence awards.  Have you ever wondered who Geneva Clay was?  Geneva and her husband J.S. “Red” Clay came to Gilbert in 1931.  They were immediately involved with the Gilbert community, and both gave of themselves for the betterment of Gilbert for the remainder of their lives.

Soon after arriving in Gilbert, Geneva began contributing to the Gilbert Enterprise by writing a weekly article for the newspaper which she did for a number of years.   During her life, she supported many causes important to the town, including the installation of a sewer system, paving the town streets, aiding in financing the building of the first Gilbert Library, and promoting the Gilbert Senior Center.

We long-time residents remember Geneva for her efforts over many years as chairman of the Gilbert Days Parade.  She worked tirelessly in organizing the annual themes and categories and filling the parade with entries she melded together into a special presentation each year.  She was officially in charge from 1961 to 1973, but I know she assisted others in their efforts when she was no longer the chairman.

During her early service years, Geneva and Red had a son named Sammy.  Earlier this year, I noticed in the obituary columns, that my friend in youth, Sammy, had passed away.  Sammy was born in 1936, during those years his mother was writing articles for the Gilbert Enterprise.  Sammy grew up in Gilbert, matriculating through Gilbert Elementary School and Gilbert High School and never was far away from Gilbert, Arizona; he lived in Mesa for the remainder of his life.

A fun, though sick story of Sammy and me happened one day when I went by the Clay home across from the Mormon Church on Washington Street.  The grapes were ripening on the vines in the Clay’s back yard, and Sammy and I ate all we could hold that morning.  We then went downtown to see what was happening.  We found Sammy’s dad, Red Clay, in Mickey’s Café and he asked us if we would like an ice cold Royal Crown Cola.  We were thrilled to get a cold bottle of pop, and when they popped the caps off, we began to guzzle the ice cold liquid.  Most people don’t remember how strong those cola’s were.  In only seconds, the drink met the acid from the grapes in Sammy’s stomach and a volcano was released all over the café’s linoleum floor.  Sammy was too sick to be embarrassed, but I wasn’t, and two really red-faced boys got out of Mickey’s Café as quickly as we could.  I’m sure Red helped clean up the mess behind us.  It is funny what you remember as highlights from our youth.  That was probably in 1945, but it seems like yesterday, seventy years later.

Geneva went to work for the Gilbert Pharmacy in 1942, and when Tom Cady bought the business, she continued to work there.  She was at the pharmacy until 1958 when she took over the Gilbert Variety Store with her brother, Eddie.  She ran that business from 1958 to 1977.  Geneva did her base work at her store while continuing to contribute to the community with her abundant energy.

Geneva helped with the fund raising of the Gilbert Library; you see her in the picture above, standing in front of the window display.  She also helped in serving on the Gilbert Historical Society Board for many years.  As a board member, she ran the Gilbert Thrift Store at the museum, and over the years generated over $60,000 towards its maintenance.

Geneva received many awards for her achievements over the years–from the Chamber of Commerce, the Town of Gilbert, Gilbert Public Schools, Arizona Public Service, the Senior Center, the American Legion and the Gilbert Historical Society.  All of us, who were acquainted with Geneva, knew a dynamic lady that never seemed to be lacking in enthusiasm.  It is only fitting that a woman who contributed so much to the community should have an award named after her to honor someone else who has also served the community in a major way.  Gilbert salutes you, Geneva Sinclair Clay for all you did for our community.

This website uses cookies to improve your experience while you navigate through the website. Out of these cookies, the cookies that are categorized as necessary are stored on your browser as they are essential for the working of basic functionalities of the website. We also use third-party cookies that help us analyze and understand how you use this website. These cookies will be stored in your browser only with your consent. You also have the option to opt-out of these cookies. But opting out of some of these cookies may have an effect on your browsing experience.
Necessary Always Enabled
Necessary cookies are absolutely essential for the website to function properly. This category only includes cookies that ensures basic functionalities and security features of the website. These cookies do not store any personal information.
Non-necessary
Any cookies that may not be particularly necessary for the website to function and is used specifically to collect user personal data via analytics, ads, other embedded contents are termed as non-necessary cookies. It is mandatory to procure user consent prior to running these cookies on your website.
SAVE & ACCEPT
error: Content is protected !!