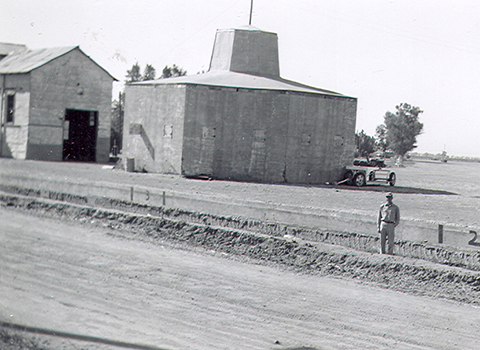 This octagonal building was part of the cotton gin on the south side of the railroad tracks and about a quarter-mile west of Gilbert’s Main Street.  The main structure of this gin was to the left of this picture and stood some three stories above ground level.

It was in the taller building that Bob Wallace and I caught pigeons while climbing in the rafters with a flashlight and gunnysack for the birds.  Bob and I had heard or read that you could catch pigeons by shining light into their eyes.  They would freeze, and we could pick them off their roosts in the rafters.  So one night we headed to the gin to try out the new theory.

We waited until dark and then climbed up the stairs to the second floor and then up into the rafters carrying our flashlight and the sack to put our captured birds in.  We were in our young teens at the time but seemed to have no fear of climbing around in the rafters in the dark.  We spotted two large pigeons, and I focused the beam of my flashlight into the bird’s eyes.  Bob grabbed the pigeon and we had our first squab dinner in tow.  To our surprise, the next pigeon didn’t move, and we caught it, too.  We caught five pigeons without falling from the rafters and decided we had been very successful.  We climbed down and took the birds home to have our mothers prepare them for dinner the next evening.

In the building that is prominent in the picture, was another story from an era of my eleventh or twelfth year of life.  Bobby Cullumber and I were exploring on the top of this octagonal building.  I don’t remember how we got up there as it was seventeen or eighteen feet above ground; I guess someone had left a ladder and we climbed up it.  We were circling the building on the south side, and I stepped over a galvanized pipe that ran from the inside of the building and was lying on the roof as we were stepping over.  The pipe then went down the outside wall of the building to the ground.

To my surprise, some unseen force grabbed my right hand and down my arm went to embrace the pipe.  Electricity flowed through me, and as I tugged to pull myself loose, my left hand grabbed the pipe as my right hand pulled away.  Again, I was locked to the pipe, now by my left hand.  I assume, in hindsight, that an electrical line inside the pipe had frayed and made the entire pipe an electric conduit.  I had become a part of the current, and though I struggled to pull away, my opposite hand would attach when I pulled my other hand loose.  As I was thinking the end of me was near, Bobby shoved me with a four foot piece of two-by-four and disengaged me from my captured state.  Bobby Cullumber had saved my life by recognizing that I was being electrocuted in broad day light before his eyes.  He found the two-by-four there on the roof and used it to keep from being likewise engaged, as I was, to the strong electrical current I had become impaled on.  I never found out what the voltage was, but I always thought it must have been more than a 220 line as I have been shocked by 220 volts and it was not as strong as this current.  If there is such a thing as 440 volts, I think that’s what held me.  That happened about 1946, but an actual electrocution happened at this same gin in December of 1953.

My brother-in-law, Jim Huey, had a brother, Jack Huey, who had graduated from Gilbert High School in 1953 and was planning to go to Arizona State Teachers College, today’s ASU.  His father, Bill Huey, was the manager of the gin, and Jack worked there before going to college.  Jack was watching over the cyclone incinerator, and somehow it got clogged up.  He climbed up on top of it to unplug the trash and slipped on the steep roof.  It appeared he reached up to catch himself on a 10,000 voltage line and was immediately electrocuted.  He fell from the roof to the ground, but was he was probably dead before falling.

The building in the picture is still beside the railroad track but few people would ever know of the many stories that have happened there.  Every building has recorded thousands of tales, but we don’t know how to extract them from inanimate timber, concrete and steel; we only know those stories that people have recorded.