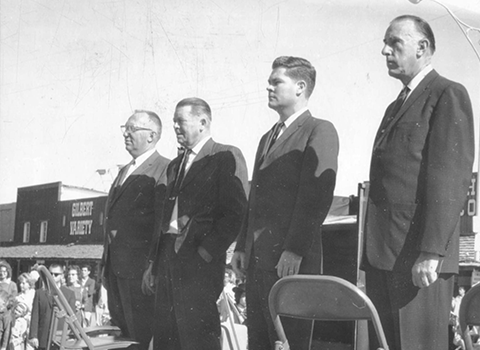 Prior to the Gilbert Days Parade in 1963, Geneva Clay, our parade manager, had invited Governor Paul Fannin to be the Grand Marshall.  Governor Fannin had accepted and was planning to honor Gilbert with his presence and lead the Gilbert Day Parade.

In Dallas, Texas, the day before our annual celebration, President John F. Kennedy was shot and killed.  That event occurred at 12:30 PM on November 22, 1963.  President Kennedy, too, had planned to ride in a parade through the streets of Dallas, Texas, but he was shot on the parade route.  Kennedy’s assassination changed everything in America that day.  Not only the government of the United States, the lives of American citizens but it also changed our Gilbert Days in the small town of Gilbert, Arizona.   Of course, this news made the headlines of the newspaper.  What would be appropriate for the town of Gilbert to do under these new circumstances?  The Governor’s office, too, was affected by the dramatic change that had taken place.

With coordination between the Gilbert Chamber of Commerce, the Town of Gilbert, and the Governor’s office, a day for a parade became a day to memorialize the loss of our young president.  Although President John F. Kennedy had served for less than three years, he had made many bold changes for our democracy and was a very popular president of the United States of America.  His assassination was almost impossible for American citizens to accept; we were traumatized.

There were other factors too–President Jack Kennedy was very handsome, and his wife, Jacqueline, was beautiful, and their two children, Caroline and “John John,” were what everyone would think of as our country’s children.  The Kennedy’s son was called “John John”; his real name was John F. Kennedy, Jr.  All of these emotions ran through our minds and hearts, and everyone’s desire was to do what was right and proper under these terrible parameters.

It was agreed overnight to change the usual Gilbert Days to a Gilbert Memorial for our fallen president.   John F. Kennedy was America’s thirty-fifth president and the youngest to serve our nation.  As usual, in this period of Gilbert’s history, I served as the emcee for the Gilbert Day Parades, and I was asked to be the emcee for the memorial on November 23, 1963.  Our mayor was Morris Cooper, and he wrote and delivered a talk about our president.  Governor Paul Fannin delivered his speech recognizing the virtues of public service and the importance to have great leaders for our nation.

The staging for the memorial service was on a cotton trailer bed.  It was decorated in black, and black bunting surrounded the wagon except for the steps for the entrance onto the wagon.  The setting for the event was on the west side of Main Street a little south of the Gilbert American Legion.  Townspeople encircled the trailer, and the memorial was held before hundreds who had come to town even though the parade had been cancelled.

This week the Arizona Republic Newspaper is celebrating their 125th year of publishing a newspaper in our state.  Back in 1890 when they began, their name was a little different; I have noticed in my research the paper was initially called the Arizona Republican.  1890 happens to also be the date Arizona Territorial Governor C. Meyer Zulick homesteaded land in what is now Gilbert, Arizona.  He was Arizona’s Seventh Territorial Governor and served between 1884 and 1889 prior to his acquisition of land in our community.  Congratulations to our state and town on handling the Kennedy Memorial and to the Arizona Republic for being there 52 years ago.