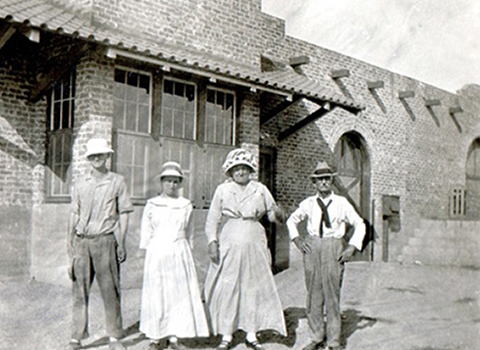 The Gilbert Depot was the center of our universe as we grew up in Gilbert in the 1940’s.  As I was reflecting on how Gilbert used to be, I remembered jumping our bikes up on the northwest corner of the old depot.  The rise was about three feet from the roadway below the corner, and it was a fun thing to ride into the bank and jump ourselves and our bikes up to the floor level that surrounded the west end of the Gilbert Depot.

The Gilbert Depot was built in 1905 using large red bricks.  The design of the structure was in a Spanish Colonial style, and the building was a fascinating place for we boys to look over and to explore the things that were going on inside.  Many of the merchants’ sales items came by way of train in the 1940s, so the depot was a hub of enterprise, and it made the depot our little town’s major point of interest.  The railroad line through Gilbert had been laid through this farm area, not to service our merchants, but to reach the gold and copper fields in Winkleman and Ray at the end of the line.  Gilbert’s blessing was that we were bisected by a straight line that extended from a point on Baseline Road and the railroad track, all the way to a point on the Gila River, north of Florence, Arizona.

My imagination got carried away, and it reminded me of one of the games Bob Wallace, Bobby Cullumber and I used to play as we walked down the railroad track southeasterly from the Gilbert Depot.  One of us would begin a story, usually a murder mystery, and after setting the stage, he would turn the story telling to the other and he would add to the story and take the story in whatever direction he wanted to, and so forth.  It is stimulating and makes the mind work on all cylinders, which is good exercise and perhaps adds healthy lubricant to the brain.  You perhaps have played such games in your youth or as young adults.

Our purpose for walking down the railroad track was to go to the bridge over the first canal.  We explored as we walked, and our stories made the walk go faster.  If the train was coming, we got down into the canal and under the bridge and let the train run over us.  The bridge shook something awful and we thought it would surely cave in on us, but it didn’t.  Having the sensation bolstered our courage, and we walked taller after the experience.

When we walked to the northeast from the depot, we often stopped by the old cotton gin that had been boarded up on the north side of the tracks.  One exciting morning as we were climbing through the rafters and the second floor, we saw a police car coming.  We panicked as we thought the officer was coming to arrest us for trespassing.  We scattered to keep from being found.  I ran for the basement, and as I ran where the conveyor screws had been, I jumped from one concrete base to the next.  However, to my surprise my second leap drove my head into a concrete formation above my head and I was knocked unconscious and fell to the floor.  When I woke, my face was covered with blood as I had cut a gash just behind my wave on the forefront on my head.  I no longer worried about the police car that had gone by.  I began calling my friends, and they came to my rescue, and we walked out of the gin with blood running down my face.  We then decided to put my head under one of the huge water spigots that were where the cotton bales used to be stacked.  I guess my nurses (buddies) and I thought the water would stop me from bleeding.  The blood didn’t stop flowing as the rushing water washed my head, but on the walk home the blood finally coagulated.

It was another day in our explorations that often began at the Gilbert Depot or could we think of it as the “Coincidence Depot”.  I miss being able to see the old depot that was razed by the Southern Pacific Railroad in 1969.  I wish it were still here for all to see.

This website uses cookies to improve your experience while you navigate through the website. Out of these cookies, the cookies that are categorized as necessary are stored on your browser as they are essential for the working of basic functionalities of the website. We also use third-party cookies that help us analyze and understand how you use this website. These cookies will be stored in your browser only with your consent. You also have the option to opt-out of these cookies. But opting out of some of these cookies may have an effect on your browsing experience.
Necessary Always Enabled
Necessary cookies are absolutely essential for the website to function properly. This category only includes cookies that ensures basic functionalities and security features of the website. These cookies do not store any personal information.
Non-necessary
Any cookies that may not be particularly necessary for the website to function and is used specifically to collect user personal data via analytics, ads, other embedded contents are termed as non-necessary cookies. It is mandatory to procure user consent prior to running these cookies on your website.
SAVE & ACCEPT
error: Content is protected !!