There are many reasons people join the military. My father joined the Air Force for job training and the educational opportunity. My brother joined the US Marine Corps for adventure, service, and travel. I was an Army cadet in ROTC in college, eager for the opportunity to serve my country. People serve for many reasons, at the top of which tend to be for country, for family, for honor. People who serve in our armed forces are willing to die for these reasons. Memorial Day is a time to acknowledge the many who have died in service of our freedom.

In the United States, we commemorate and celebrate the lives of those who fought and died valiantly. Memorial Day is an American holiday, falling on the last Monday of May, honoring the men and women who died in service to our country.

The tradition of honoring the fallen can be traced back thousands of years, to when the ancient Greeks and Romans commemorated the valor of soldiers’ deaths with feasts, flowers, and public displays of mourning. According to history.com, Memorial Day was originally known as Decoration Day and “originated in the years following the Civil War, becoming an official federal holiday in 1971.”

According to Barbara Maranzani, a NY-based writer and editor, focusing on American and European history:

One of the earliest US commemorations was organized by recently freed slaves. As the Civil War neared its end, thousands of Union soldiers, held as prisoners of war, were herded into a series of hastily assembled camps in Charleston, South Carolina. Conditions at one camp, a former racetrack near the city’s Citadel, were so bad that more than 250 prisoners died from disease or exposure and were buried in a mass grave behind the track’s grandstand. Three weeks after the Confederate surrender, an unusual procession entered the former camp: On May 1, 1865, more than 1,000 recently freed slaves, accompanied by regiments of the U.S. Colored Troops and a handful of white Charlestonians, gathered in the camp to consecrate a new, proper burial site for the Union dead. The group sang hymns, gave readings and distributed flowers around the cemetery, which they dedicated to the “Martyrs of the Race Course.”

Maranzani also describes how in May 1868, General John A. Logan, the commander-in-chief of the Union veterans’ group known as the Grand Army of the Republic, “issued a decree for a nationwide day of commemoration for the more than 620,000 soldiers killed in the recently ended Civil War. On Decoration Day, as Logan dubbed it, Americans should lay flowers and decorate the graves of the war dead ‘whose bodies now lie in almost every city, village and hamlet churchyard in the land.’

Many Americans mark Memorial Day by visiting cemeteries, hosting gatherings, flying the flag at half-staff, and marching in or attending parades. Other ways of honoring the fallen include creating and gathering at monuments, online memorials, and decorating graves of those killed in action. At 3p.m. local time, a national moment of remembrance takes place.

At HD South, Home of the Gilbert Historical Museum, 3 monuments memorialize soldiers who served in World War 2, the Vietnam War, and the Korean War. The central monument, for WWII, was dedicated in 1965 and, according to Dale C. Hallock, created by Glenn Martin. According to Hallock, “Glenn Martin was the local barber and as he cut the hair of almost every fellow going to WWII from Gilbert, he had them give him a picture of them in uniform.  He put those up in his shop.  They are now in the big framed picture that is in the military room at HD south.  Then Mr. Martin decided to build the monument that would sit in front of city hall.  He did a fund-raising campaign to get the money to build it and the townspeople donated the needed funds and the monument was built.”

In WWII, 21% of Gilbert’s population served the war effort. 1% died serving our country and our town. In “Gilbert” My Town, Dale C. Hallock gracefully acknowledges the lives of Gilbert men lost in this war with what information he was able to recover regarding these men:

Henry Angle, known as Hank, captured by the Japanese in the Philippines; later reported to be killed in action.

Delbert Artherholt, killed in action in Germany soon after his arrival in Europe.

Leonard Bohannan, killed in action in Italy in 1944.

Nick R. Davis, killed in action as part of the Glider Infantry.

Meredith Miller, killed in action while training to become a pilot.

Carl J. Needham, killed in action as a member of the US Army.

Ramiro B Quintero, killed in action in Europe.

Gilbert residents killed in the Korean and Vietnam Wars include:

Harry Heinke, killed in action over Korea in 1952.

Clarence S. Hills, killed in combat in 1968 in Vietnam.

Rodolfo Valenzuela, killed in combat in 1969 in Vietnam.

It is difficult to find data for all those killed in action but there are various online memorials that help for specific periods of time. From February 2002 – 2015, 170 soldiers, marines, aviators and sailors with ties to Arizona were killed in the line of duty while serving in Iraq or Afghanistan.

In 2011, I was asked to document the homecoming and subsequent services for an Arizona based Green Beret killed in action in Afghanistan. This man had a wife, a son, and another child on the way. I review these images every Memorial Day and take a moment to remember the privileges I have in this country that were protected by people willing to die for them; to die for me; and I am grateful. 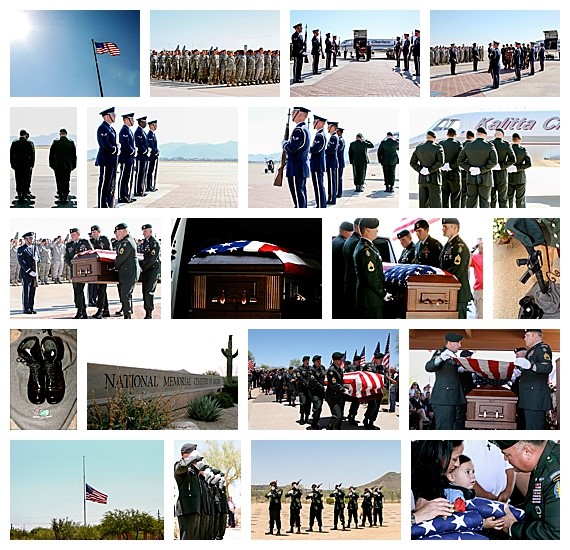 Maranzani, Barbara. “8 Things You May Not Know About Memorial Day.” HISTORY. May 2019. A&E Television Networks. https://www.history.com/news/8-things-you-may-not-know-about-memorial-day