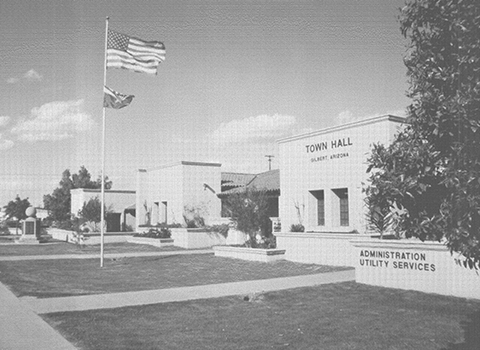 In this photograph of the old Gilbert Town Hall, you can see the modernization of our administration building in 1982.  In previous articles, you have seen the early pictures of Gilbert’s Town Hall and later the western frontage of the building in the 1960s.  In this picture, you can see the building was given a new addition on the north end, and the front of the building was redone to look like a modern city hall.  The modernizing of the town hall and the workings of our administration were accomplished under the direction of Mayor L. J. Reed.  Mayor Reed served from June 2, 1981 to June 2, 1987. As I was reviewing this picture, I wondered what other past mayors might have thought when seeing what came of Gilbert after their service.

Our first mayor, Everett R. Wilbur, would have been glad to have had a building to meet in back in 1920 when Gilbert was first chartered.  Gilbert was organized on July 6, 1920, almost 95 years ago, and Mayor Everett Wilbur became our first mayor.  He served from July 6, 1920 to August 2, 1921.  What are some of the records former mayors have attained while serving our now thriving community?

Gilbert’s second mayor to serve the town at two different times was Steven Berman, who served from June 13, 1989 to June 4, 1991.  Mayor Berman also led from June 12, 2001 to June 15, 2009.  Mayor Berman and Mayor Walter W. Page both served our community for ten years, which is the longest time anyone has served as mayor of Gilbert.

The shortest time as mayor belongs to John Moore, who only held the office for one month and ten days.  I am sure John felt that forty days was almost too many.  Moore led our community from July 1 to September 1, 1967.

As I was reviewing our list of mayors, I reflected on one of our mayors who served from November 7, 1921 to June 17, 1923.  Mayor R. W. Merrell was shot and killed in what was decided to be an accident in the 1930s.  It was long after Merrell’s service to our community, but it was tragic and affected the social fabric of our small town.   Watch for next week’s article to read the details of this incident.  Fortunately, our other mayors that have passed away have done so from natural causes.

Claude J. Cullumber was Gilbert’s fourth mayor and served immediately after Mr. Merrell’s administration from June 5, 1923 to June 17, 1925 and he happens to be the first previously serving mayor that I knew personally.  As a boy, I played a lot with Bobby Cullumber, the last of the Cullumber children.  One of the highlights of my youth was to play Monopoly with Mr. and Mrs. Cullumber and Bobby.  The game is wonderful but takes up to three hours to play.  In my older years now, I realize what super parents the Cullumbers were to stay up evenings and play a table game with boys.  Oh, there was no television then, and even though people listened to the radio, there were people like the Cullumbers who took the time to be involved with their children and their friends.

Walter Page was Gilbert’s sixth mayor, and he had a grocery store in Gilbert that was famous to me and my young friends.  One of Mr. Page’s rules was that when parents paid their monthly bill, he would give marbles to the boys in the family.  In the 1940s, the Page home was directly behind our house on Delaware, and his home faced Park Street. The name of the park near their home was changed from Gilbert Park to Page Park because of the good leadership Walter Page gave to our community during the ten years he served from June 8, 1927 to June 7, 1937.

When you look at a building, there isn’t much to read into the brick and mortar; a wall doesn’t do much talking.  But when you think of those who served there, then there are great stories that have been forged by those who have gone before us.  I have only touched on a few mayors, but many people have worked in other positions to make our town efficient and all of them have left stories that make a history for them and for us.  May we have the time to listen and hear them.