The Bank of Gilbert 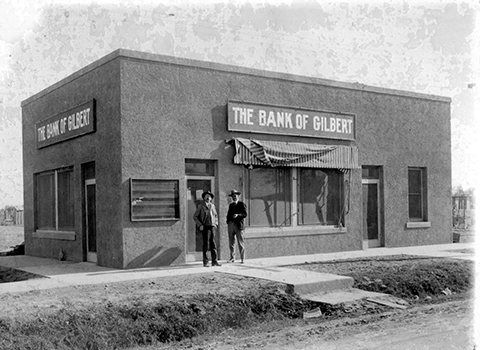 The Bank of Gilbert

In 1917, a group of businessmen created the Bank of Gilbert and then built a large structure at the southeast corner of Page Ave. and Main Street for the bank.  The building stands today and is now the office of Allstate Insurance.  At ninety-eight years of age, the building must hold many wonderful stories of our town’s history.  It would be wonderful if we could mine those stories from the brick and mortar that holds them.

The building was constructed on Lot 9, Block 6, of the Gilbert Townsite.  It was in the first subdivision in Gilbert, which was recorded in 1914.   A few of the men that created the bank were W. A. “Bill” Anderson, E. R. Wilbur, J. I. Burk, Charley Hoffman, Abe Cosby, and F. D. Rowell.  Dr. Rowell was elected to serve as the first president of the new Bank of Gilbert.  J. Irwin Burk was the first secretary and Abe Cosby was the first cashier.

E.R. Wilbur was the gentleman who donated the land for Gilbert School District’s first school in 1913, which today is the Gilbert Historical Museum.  He later became the first mayor of Gilbert when the town was incorporated in 1920.  Bill Anderson was from the first family in Gilbert to homestead and farm land on the east side of Gilbert Road, just north of Guadalupe Road in 1891.  J. Irvin Burk came to Gilbert in 1912 and later became a teacher, a lawyer and a state legislator.  Dr. F. D. Rowell, prior to coming to Gilbert in 1912, was a medical doctor but chose to be an animal doctor after arriving here.  He is probably best remembered for planting the large pecan grove on both sides of the Consolidated Canal on the north side of Elliot Road.

In 1920 the bank president was Barkley Skinner.  Everett R. Wilbur and C. H. Russell were directors of the bank, and John D. Calhoun was the cashier.  C. H. Russell came to Gilbert in 1915 from Wyoming.  C. H., as he was usually known, was a realtor and a developer, who in 1920 subdivided a parcel of land on the southeast corner of Warner and Gilbert Road into Sonora Town.

The Bank of Gilbert was only in this location for a short time before moving across Main Street into a new building, and the bank itself was absorbed into the Bank of Chandler only a few years after its creation.

After the bank moved, the building became a drugstore called the Southside Pharmacy. When I was a boy in the 1940s, the drug store was owned by Mr. Webber, and the sign on the front of the building read Webber Drug Store.  Later the building served as many things, including a restaurant and at one time Dr. D.V. Haws used the building as his medical office.  During that period of time Dr. Haws delivered a baby girl in the vault of the old bank.  That vault still stands in the middle of the store, just as it was in 1917 when the structure was first constructed.  I couldn’t remember Dr. Haws, first name and called his 93 year old sister-in-law Maxine Cooper Haws to get it.  She called me back to say his name was David Virgil but he always went by DeVee.  Thank you so much, Maxine.  Maxine was a Cooper girl from the family from which Cooper Road is named.

We have already mentioned the building today is an Allstate Insurance office, but you can imagine all of the tenants and clients that have passed through this edifice without their history having been recorded.  If those walls could talk, there are, I’m sure, even more interesting things that have occurred there.