The flooding of Gilbert 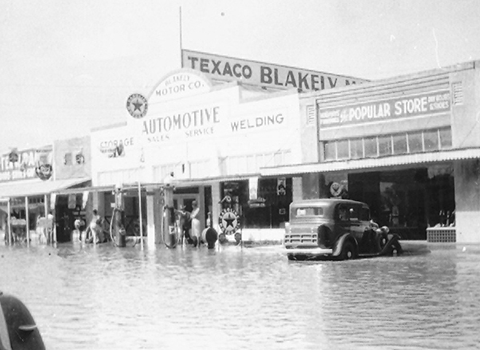 The flooding of Gilbert

This picture of the Blakely Automotive building, the Serrano Popular Store and the Page Market on the left, is shown with the flood of 1938 in the foreground.  Today, these three former businesses comprise the Norwood Furniture Store.  The important part of this scene is that Main Street is covered with water.  In a past article, we have discussed how Queen Creek overflowed its banks several times in the 1930s and gave Gilbert’s streets a bath.  Those floods were only on the north side of the railroad tracks.  The base for the trains acted as a dam, keeping the water on the north side, and thus Gilbert’s Main Street took a bath.

Today I thought I would tell you my old memories of the three stores and the people that ran them.  Walter M. Page was not the first owner of his grocery and meat market, but he made a lasting impression on Gilbert for his innovative ways of marketing.  He brought in the most modern refrigerator system to keep his meats fresh for the people of Gilbert.  Page served diligently on the Chamber of Commerce to modernize our community.  He brought croquet, his favorite pastime, to Gilbert.

He had a croquet course built next to his home on Park Street, next to the Gilbert Town Hall, and also between the old Tone Building (Joe’s Real Barbeque) and the Clair Sheet Metal shop (Bergies) in old downtown.  He also served for many years as the Mayor of Gilbert.

My favorite memory as a boy was that Mr. Page gave marbles to the parents of boys, when they paid their monthly bill for groceries they had purchased.

The Blakely building was built by Charles M. Blakely and his wife, Luella, and offered an auto sales garage and a restaurant in the beginning.  The building later became a used furniture shop and sold everything from kerosene to ice.  Mr. Blakely also created an ice delivery service, and George Harmon was our ice man for many years.  Our mothers would put an ice sign in the front window showing 25, 50, 75 or 100 pounds.  When George drove up, he read the sign and cut a piece of ice to fit their need.  He then would carry the block of ice into their home with his large ice tongs and put the block in your ice box, which was in the kitchen of your home.  Once a month he would bring an ice bill, and when mom paid the charge, George would give her a package of kool aid, that mom could make up as a great summer drink for us kids.

We also bought kerosene at the Blakely’s Center.  Those were the days that we burned kerosene in our homes.  Used furniture was for sale there, too, and Luella Blakely had a wonderful restaurant called the El Nopal Café in the north side of the building.

In the Serrano “Popular Store,” Albert Serrano was the manager of the store, and it provided clothing, shoes and material to make your own shirts and dresses.  We have mentioned Claude Cullumber previously who was a very dapper dresser and fitted you with pants and suits, and the store put the hem in your pants.  I have not mentioned a beautiful middle-aged red head that worked in the Popular Store for years.  Her name was Mary Beebe, and she was the most vivacious person I had ever met as a teenager.  She was all-knowing of the things that were happening in our community, and her happy demeanor absolutely made it a pleasure to shop in Serrano’s clothing store.

When I think back to those early days of my life, the 1940s and 50s, it was a peaceful time after World War II, and the Town of Gilbert ran like a very self-contained community.  Today, we think nothing of driving twenty-five or thirty miles to shop in a store that has what we want, but we didn’t do that in the 1930s and 40s.  The world has changed so much, just thinking that we had uncontrolled flooding in the 1930s, and today we have catch basins in all our new subdivisions just to control rain water.  Many of our modern engineering marvels have made Gilbert and America part of today’s modern world.