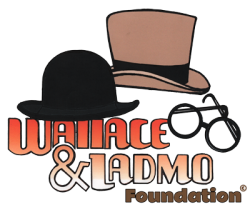 History of The Wallace and Ladmo Show

By Sharon Kelly, former camera person, director and producer of the Wallace and Ladmo Show

If you grew up in the Phoenix area or lived here in the 70’s or 80’s, there’s no need to read any further. You already know about the iconic “Wallace and Ladmo Show.” But for those who moved here after it went off the air in 1989, you may keep hearing about these guys and wonder what the big deal is. This is for you.

Wallace and Ladmo was a “kids show” on KPHO/Ch 5 that aired for over 35 years, considered to be one of the longest running shows (with the same cast) in TV history. Many adults and college students watched it, too.

It was kind of a Saturday Night Live format –with comedy sketches, live music and cartoons. It was a daily (Monday thru Friday) hour-long show, performed in front of a “live” audience. Much of the humor was political or satirical which kept the adults watching –and at other times, the humor was plain slapstick –appealing to kids and adults. It started in 1954 with Wallace (Bill Thompson) who worked in the KPHO studio and art department.

A new cartoon package had been acquired and the program manager needed someone to “fill” in between cartoons and commercials. Wallace volunteered and soon talked his friend Ladimir Kwiatkowski, a KPHO camera operator, into joining him as a “sidekick.” The two performed various comic sketches with Ladmo often locking the camera off, and running around in front of the camera to perform the various bits.

A few years later, Channel 5 hired a young news anchor and weatherman named Pat McMahon. Pat, who came from a vaudeville family, often watched Wallace & Ladmo from the sidelines and was astounded at the sketches the two performed. Soon Wallace wrote a bit that involved three characters. He enlisted Pat’s help and the trio was complete.

Pat took on the role of dozens of characters including Marshall Good, a has-been cowboy star; Aunt Maud, a crotchety old lady who would read “children’s stories” with tragic endings; Boffo, an ill-tempered clown who disliked kids, Captain Super, the resident hero who wasn’t heroic– and a spoiled rich brat named “Gerald” (who kids loved to hate!) When Gerald entered studio or stage, the audience would scream a boisterous “boo!” He was the show’s villain.

Wallace wrote scripts for the teleprompter but much of it was “adlibbed.” No subject matter seemed to be off limits. Commercials were done live and though Wallace and Ladmo sometimes poked fun of products –there was a waiting list of sponsors to get on.

Music was an important part of the show. In the 60’s, Mike Condello, a talented local Phoenix musician, was hired as the show’s music director. Mike recorded a series of songs to the music of Sgt. Pepper’s Lonely Hearts Club Band –which to this day sound incredibly like the real thing. Mike also wrote the famous opening theme called “Ho Ho Ha Ha Hee Hee Ha Ha” which is still often requested. To compete with rock music’s “British Invasion”, the band Hub Kapp & the Wheels was created, becoming an overnight sensation.

Aside from encouraging local musicians, Wallace encouraged other young talent, including an Arcadia High School student named Steven Spielberg, who would appear on the show with excerpts from his latest homemade films.

Years later, when producer/director Sharon Kelley was working on the 35th Anniversary Special, Spielberg sent her an on-camera message for Wallace & Ladmo, filmed during the production of Indiana Jones III. He remained a loyal fan. A letter he wrote to Wallace in 1997 says, in part: “Your show inspired me, made me laugh, made me think, and even raised my level of expectations whenever I looked around at things that could make me laugh.”

Other guest appearances through the years included Jack Benny, Mohammed Ali, Steve Allen, Waylon Jennings, Alice Cooper and many others. When any celebrity had a stop in Phoenix, they were sure to appear on “Wallace and Ladmo.”

Over the years, the show won numerous regional Emmy’s and a host of other honors including induction into the Arizona Broadcaster’s Hall of Fame. On April 1st, 1989 the show celebrated 35 years on the air and a huge celebration and live stage show was held at Encanto Park.More than 50,000 fans showed up on that beautiful sunny day. The cast and crew referred to it as a “mini-Woodstock.”

In addition to the stage show and primetime special, a full color “coffee table” book was published, titled “The Wallace & Ladmo Show: 35 Years of Laughter” written by Richard Ruelas and Michael K. Sweeney.

After almost 36 years on the air, the last show aired on December 29, 1989. Every news station in town sent a reporter to the Channel 5 studios to cover the event.

After Show Goes Off the Air

Ladmo continued to make appearances but tragically on March 2nd,1994, he succumbed to lung cancer. Longtime fans mourned their favorite kids show host. News media and billboards paid tribute to him and the public lined up to attend his funeral. At the service, Wall took out a “seating chart” and directed Pat to hand out a Ladmo Bag. (The “Ladmo Bag” was a brown paper sack full of goodies that lucky seat winners or contest winners would receive. It was a much prized and coveted item for years, by young and old alike.)

In 2004 Richard Ruelas wrote a book about Wallace and the early days of Phoenix TV titled “Thanks for Tuning In” –now in its second printing. On July 23, 2014 Wallace died at the age of 82. Theater owner Danny Harkins provided the large Tempe Cine Capri for the memorial service which was produced by Wall’s daughter Carri, and attended by family, fans and friends. It was “standing room only.”

Pat McMahon remains one of the Valley’s most popular broadcast personalities –with shows on KTAR and a talk show on KAZ-TV. There are fan clubs, Facebook pages and websites devoted to the show. Writer/Actor Ben Tyler has produced several plays about it.